2-chorotrityl chloridie resin is a triphenylmethyl based resin. Its structure is shown in the figure.

The synthesis method using triphenylmethyl resin as carrier is that triphenyl methyl (TRT) resin contains triple benzyl structure, so it has high reaction activity. Generally, the same molar amount of protective amino acids and 4 times the amount of N, N-diisopropylethylamine (DIEA) and TRT resin are mixed in dichloromethane, and the reaction can be completed in 30-120 minutes at room temperature. For sites that do not react completely, methanol can be used to seal the sites. 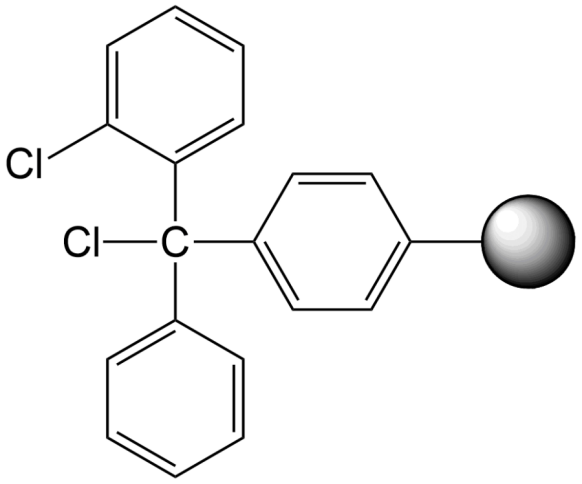 a. Small steric hindrance, which facilitates the penetration of solvent, so that it can make rapid and unimpeded contact between growing peptide chains and reagents.

b. There are enough reaction sites to covalently connect amino acids to these sites, and after the synthesis reaction, the covalent bond is cleaved, so that the carrier with per unit volume gives a useful yield of peptides.