Cage peptides refer to a class of peptides with a three-dimensional structure and are a class of hollow cage-like macromolecules. Because of their unique structures, caged compounds especially caged peptides have been a common research hotspot in medicine. Cage peptides have greatly enriched and perfected scientific theories, showing great potential applications.

The caged peptides have an optically removable protecting group, which can shield the polypeptide from binding to the receptor. When exposed to UV radiation, the peptides will be activated to restore their affinity with the receptor. Because this optical activation can be controlled according to time, amplitude or position, caged peptides can be used to study reactions occurring in cells. The most commonly used protective groups for caged peptides are 2-nitrobenzyl and its derivatives, which can be introduced through protected amino acid derivatives in polypeptide synthesis. The developed amino acid derivatives include amino acid, cysteine, serine and tyrosine. Aspartic acid and glutamic acid derivatives are not commonly used because they are easy to cyclize in the process of peptide synthesis and dissociation.

The caged peptides conform to the principle of photo directed activation. On the one hand, a peptide that inhibits or activates the activity of a protein is modified with a photolabile group at a specific residue to block its ability to bind to its target protein. Near ultraviolet irradiation removes the protection group and generates an active peptide that binds to the target protein. Similarly, a caged protein can be created by labeling an amino acid in the protein that is essential for its activity (Figure 1a). On the other hand, photoactivation of microinjected caged peptides at specific cellular locations can be used to investigate the function and kinetics of specific proteins in processes that might include: membrane receptor signaling, calcium signaling, regulation of cell adhesion at focal contacts, actin polymerization, cellular energetics or metabolism (Figure 1b). 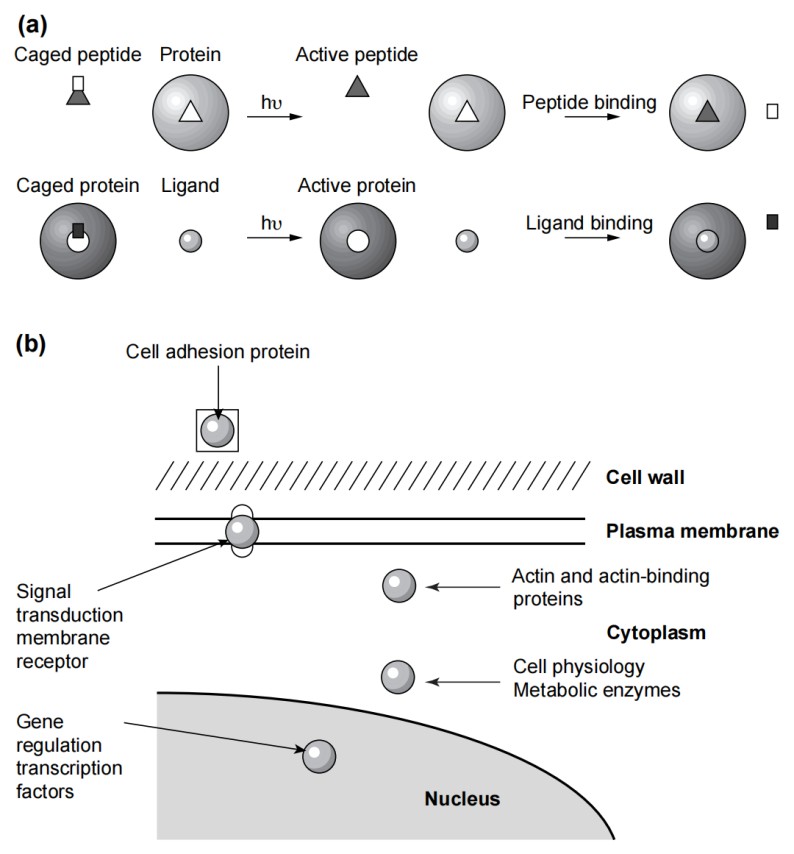 Caged peptides can be used in anti-tumor treatment. For example, Caged peptides can self assemble with micro RNA-140 (mir-140) to form nanoparticles for deep down-regulation of PD-L1 to enhance immunotherapy. After entering tumor cells, nanoparticles will be decomposed by cathepsin B and release caged GO203 peptide and other substances. The caged peptide is released in a highly reduced intracellular environment and binds to mucin 1, thereby downregulating the expression of PD-L1.