Peptides play an important role in regulating the functional activities of various systems, organs, tissues and cells in the body and in life activities, and are often used in disease research, cosmetics, drug research and development and other fields. Peptides can be divided into cyclic and linear peptides according to whether they are cyclic or not. The synthesis technology of linear peptides is very mature. The synthesis of linear peptides consisting of hundreds of amino acids has been achieved. Although many linear peptides have good biological activity and stability in vitro, the linear peptides are degraded under the action of enzymes after entering the body, which eventually leads to the loss of their activity.

With the deepening of the understanding of life phenomena and protein functions, and the expansion of the demand for lead compounds and various functional materials for drug design, people pay more attention to peptides with special structures and special properties. Among a wide variety of peptide compounds, cyclic peptides are an extremely important one. Cyclic peptides have a well-defined fixed conformation, are more rigid than linear peptides, and exhibit stronger affinity for target receptors. In addition, the absence of free amino and carboxyl groups in the cyclic peptide molecule greatly reduces its sensitivity to enzymes. The special structure of cyclic peptides and the stability to enzymatic degradation make them widely used in biomedicine, medicine, nanomaterials, supramolecular self-assembly and other fields.

According to the cyclization method of cyclic peptides, it can be divided into side chain -to-side chain type, head-to-tail type, side chain-to-end type, and disulfide-bridge, etc.

This cyclization method involves the formation of amide structures between aspartic acid or glutamic acid residues and the base amino acid. Side chain protecting groups must be selectively removable, whether the peptide is on resin or after dissociation. In addition, this cyclization method can also form diphenyl ethers via tyrosine or p-hydroxyphenylglycine.

This cyclization was introduced by deprotection of a pair of cysteine residues followed by oxidation to form a disulfide bond. The synthesis of multiple rings can be achieved by selectively removing the thiol protecting group. Cyclization can be done either in the solvent after dissociation or on the resin before dissociation. 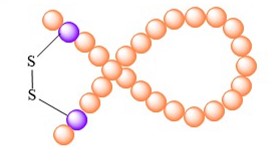 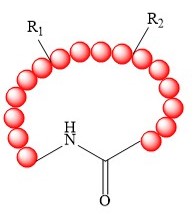 In the future, some applications of cyclic peptides in the pharmaceutical industry are expected to surpass small molecules and antibodies.

The following are cyclic peptides approved for clinical use between 2001 and 2021:

Cyclic peptides are attracting more and more attention as a unique molecular class.

The following are other related cyclic peptide molecules: