Modification of N-Terminal or Side Chain Amino Groups

Modification of N-Terminal or Side Chain Amino Groups

Peptides have good biological activity. However, due to poor stability and other reasons, the application of peptides is relatively limited. By modifying the N-terminus of the peptide, its structure and physicochemical properties can be changed, thereby improving its stability and biological activity. There are many methods for N-terminal modification of peptides, such as acetylation, PEG (polyethylene glycol) modification, and fluorescent reagent modification. The N-terminal amino acid of the peptide can be lysine, cysteine with thiol group, serine, threonine and tyrosine with hydroxyl group, arginine with guanidine group.

A common feature of formylation of peptides is that the amino terminus (N-terminus) of the peptide sequence is modified by formylation. Formyl peptides are ubiquitous pathogen-related and injury-related molecules. Formyl peptides play important roles in immune defense and regulatory processes.

2-Aminobenzamide is an organic compound containing fluorescently labeled glycans with free reducing ends, which can be used for non-selective and efficient fluorescent labeling of polysaccharides. 2-Aminobenzoylated peptides can be used as substrate peptides with fluorescent color reaction for the detection of enzymes. 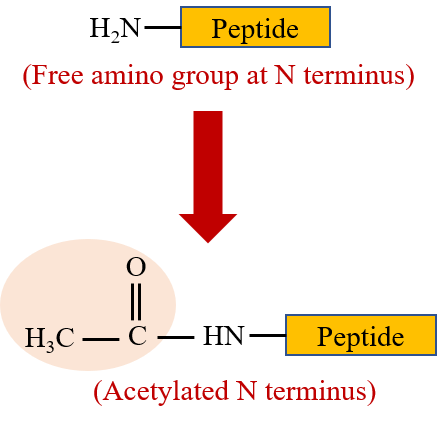 Palmitoylation modification at the N-terminus of the peptide chain is a common structural modification, and the modified structure can enhance the permeability of the skin layer. Many palmitoylated peptides are useful in the skin care industry.

Acylation of the N-terminus with fatty acids allows peptides or proteins to bind to cell membranes. Myristic acid can be attached to the N-terminus of the resin-peptide using standard coupling reactions, and the resulting lipopeptide can be cleaved under standard conditions and purified by RP-HPLC.

Biotinylated peptides are commonly used in immunoassays, histocytochemistry and fluorescence-based flow cytometry. Labeled anti-biotin antibodies can also be used to bind biotinylated peptides. During Fmoc solid-phase synthesis, biotin can be attached to the lysine side chain or the N-terminus. 6-aminocaproic acid was used as a link between the peptide and biotin. Links can bind substrates flexibly and bind better in the presence of steric hindrance.

HYNIC (hydrazine imide) is a highly efficient chelating agent that offers the possibility for efficient and localized modification of biomolecular imaging.

DOTA is a bifunctional chelating agent with high thermodynamic and kinetic stability. DOTA bifunctional chelating agent contains two reactive groups at the same time, one of which can react with amino groups in peptides and proteins to form stable covalent bonds, and the other reactive group reacts with metal nuclides (such as lanthanum) system) to form stable complexes.

DOPA can be used to modify proteins, peptides and other materials with reactive groups. There is a synergistic adsorption effect between DOPA and the positive charge of lysine.

Trifluoroacetyl (TFA) has excellent protective effect on hydroxyl and amino groups, and has a very important application in the synthesis of amino acids and polypeptide compounds. TFA can be introduced into the peptide sequence with trifluoroacetic anhydride and can be easily removed in dilute lye. TFA-protected amino acids or peptides are readily vaporized under high vacuum and can be used in gas chromatography to detect the degree of racemization and to determine the sequence of native peptides. The purity, degree of racemization, etc. of the trifluoroacetyl-modified peptide can be detected by 19F NMR.