Non-essential amino acids refer to amino acids that the human body can synthesize by itself or convert from other amino acids, and do not necessarily have to be directly ingested from food. Such amino acids include glutamic acid, glutamine, alanine, glycine, cysteine, aspartic acid, asparagine, proline, serine and tyrosine. 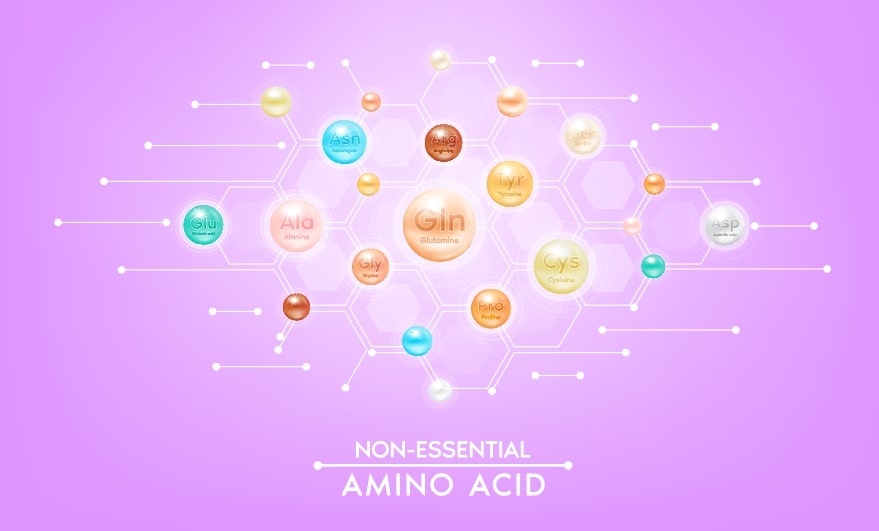 Alanine is the basic unit of protein, which can prevent kidney stones, assist in the metabolism of glucose, help relieve hypoglycemia, and replenish body energy. Alanine is mainly used in the synthesis of pantothenic acid, carnosine, etc., and can be widely used in many fields such as daily chemicals, medical and health products, food additives and feed.

Proline is a cyclic imino acid. Proline plays an important role in the human body and can also promote the metabolism of cells and maintain the healthy growth of skin and connective tissue. If the human body lacks proline, it is easy to affect joint function, causing joint pain, persistent soft tissue tension or chronic low back pain. 4-Hydroxyproline can be formed by hydroxylation after proline enters the peptide chain. Hydroxyproline is an important component of animal collagen. In addition, hydroxyproline is also present in a variety of plant proteins, especially involved in the formation of cell walls.

Tyrosine plays an important role in the metabolism, growth and development of humans and animals, and is widely used in food, feed, medicine and chemical industries. Tyrosine can promote the formation of melanin and reduce the symptoms of vitiligo. Tyrosine regulates mood and prevents anxiety, depression, and chronic fatigue. In addition, tyrosine can regulate appetite and help speed up the body's metabolism.

Serine is a neutral aliphatic hydroxyl-containing amino acid. Serine plays a role in fat and fatty acid metabolism and muscle growth. In addition, serine also plays an important role in the manufacture and processing of cell membranes, the synthesis of muscle tissue and the sheath that surrounds nerve cells. D-serine is an important neurotransmitter. As a basic amino acid constituting protein, L-serine is widely used in medicine, food, cosmetics and other industries.

Cysteine is one of the natural components of glutathione, and the molecule contains active sulfhydryl groups. Cysteine can participate in various redox reactions in the body and has a certain protective effect on cells, especially liver cells. In addition, cysteine can stimulate hematopoietic function, increase white blood cells and promote the repair of skin damage, and also has a certain detoxification effect on heavy metal poisoning.

Asparagine is one of the various amino acids that make up the proteins of living organisms such as the human body. Asparagine and its derivatives are widely used in food science, medicinal chemistry and materials science as important organic building blocks. In medicine, asparagine has the functions of lowering blood pressure, dilating bronchi, resisting peptic ulcer and gastric dysfunction.

Glutamine, an amide of glutamic acid, can be used to treat gastric and duodenal ulcers, gastritis and hyperacidity, and to improve brain function. The L-configuration isomer of glutamine is the encoded amino acid in protein synthesis.

Glutamic acid is an acidic amino acid with two carboxyl groups in its molecule, which can be used to treat hepatic coma and improve children's intellectual development. Glutamic acid is involved in protein metabolism processes in living organisms and many important chemical reactions in animals, plants and microorganisms.